Siege of Terror: The Solar War 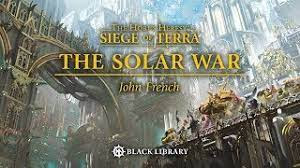 Second book of my holiday reads jumped to the start of the Siege of Terror with John French's The Solar War.
For those of us that have been reading and listening to every Black Library release for Horus Heresy it has been a long but suitably long time for it to reach its climax with the Siege of Terra. The Solar War is the first of what is a 5 part series so far. Can the Loyal Legions of the Emperor stop on the on rushing horde of the Warmaster Horus.
The book starts with the forces of the Emperor desperately preparing for the on rushing forces of the Warmaster, as the book unfolds it is a also a delaying tactic to allow the Ultramarines reach Terra and join the defence. Primarch Rogal Dorn has been given control of the defences of Terra which start at the first sphere at Pluto under the disgraced Sigismund, whilst Jubal Khan of the White Scars looks to intercept any secondary assualt.

Mersadie Oliton remembrancer to Horus before his fall from grace is given a message from an old friend to pass to Loken and escapes and avoids many pitfalls through the book.

With the every massing forces of the Warmaster both in space and the warp, how can the loyalists defend the throne of Terra?

For fans of the series you will know that it is customarry with grand operas the writers will focus on the lesser players and their perspective and view of the battle. The most interesting of these is Abaddon and his growing relationship with Chaos and his Mournival brothers. I found these parts of the book enthralling and complex and constantly looked to his next part in the battle. ( Yes I am a Sons of Horus fanboy)

This book is a grand space opera and John French manages to keep the action and battle flowing whilst giving more detail and richness to the characters that we have read through.

For those new to the Horus Heresy books this is not a starting point. You would benefit greatly from reading the first 5 books in the series. This book has wetted my appititie for what is to come in the Solar War.

What is on your reading list? and what did you think to the The Solar War?