Last weekend saw Battlefront release it's brand new book for Late War and I mentioned in my previous book review it is the one I have been looking forward to: D-Day Germans 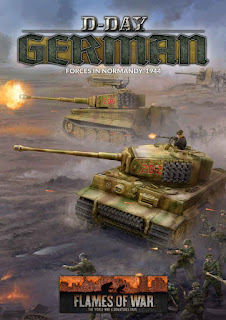 Check after the break what you get in the book and what armies I am looking to collect and get on the table.

The Germans had spent years building up their defences along the French coast. Behind this Atlantic Wall, a dozen veteran panzer and parachute divisions, rebuilding after desperate battles on the Eastern Front, prepared to throw any Allied landing back into the sea. On D-Day, 6 June 1944, the greatest air and sea invasion of the war crossed the English Channel to land on the beaches of Normandy. Although they were unable to throw the Allies back into the sea, the German forces held back the Allied tide for more than three months in some of the most intense fighting of the Second World War. The battle for Europe had begun in earnest.

This is an 80 page full colour hard back book, with all the usual high production values of previous books by Battlefront Miniatures.

So what do you get in the book?

So a packed book.

Battlefront on the Launch weekend put up a QnA video at the weekend, a good watch answering some nice questions from the community:

So having the book for a while I was immeadiately drawn to the Armoured Panzergrenadier Company. I am written, built, painted and gamed with my with this army, I will post up some detailed shots of the army and how and why I selected my list.

But I do have another couple of lists up my sleeve, I am looking at the Fallschirmjager Stug Company and Beach Defence Grenadier Company. But more of those in an upcoming post.

All in all this is the book that I was wanting waiting for and I am really happy with everything that the book that has given me.

If you are a German player then go and get it and also pick up the command cards. These add some really nice flavour and alternative lists.